Wellspring in the News

SPRINGFIELD — It’s all well and good that the romaine lettuce in the chicken Caesar salads served Thursday at Western New England University was fresh, grown locally in the middle of winter, by workers who have a chance to become part owners of the hydroponic growing company.

But how did it taste?

That was the verdict among students and visitors at the launch of the “Greenhouse Grown” program. The kickoff Thursday involved media taste-testers and a survey handed out to students after they’d gotten a chance to grab a salad with barbecued chicken strips and house-made croutons. Soon students at Springfield College and Elms College in Chicopee will get surveys as well. (More...) 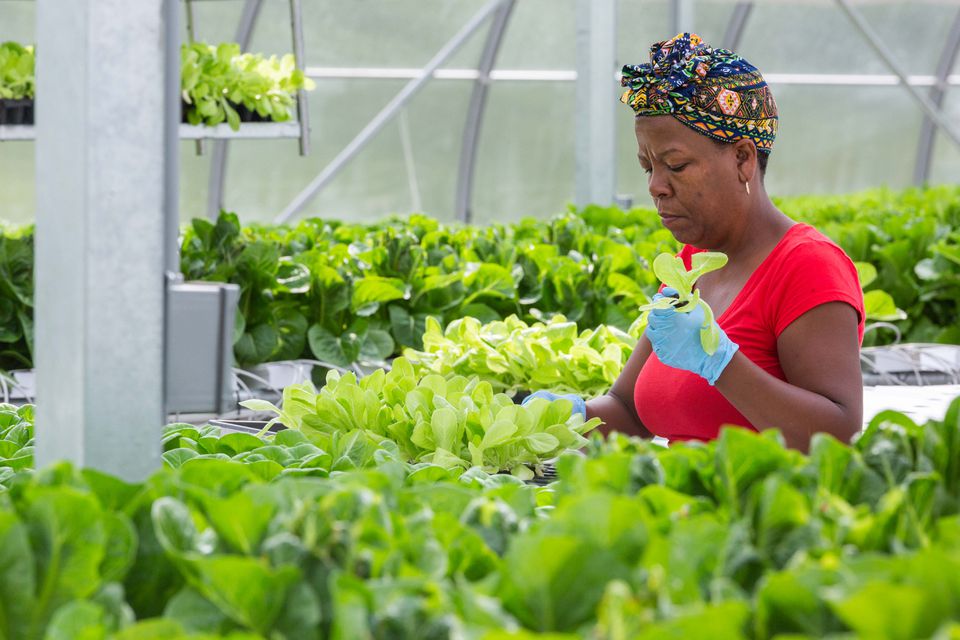 1 / 22
8/14/2019 - Springfield - Wellspring Harvest greenhouse celebrates its one year anniversary with a tour of its Indian Orchard facility Wednesday morning. Worker owner Millie Garcia of Springfield picks the lettuce in the greenhouse.
(Read more...)

NDIAN ORCHARD, Mass. (WWLP) - Lettuce grown in a greenhouse in Indian Orchard is now on the vegetable shelves at several Big Y supermarkets in Greater Springfield.

The Lettuce is grown at Wellspring Harvest Greenhouse, at a property in Indian Orchard.

The first shipment arrived this morning at the Big Y on Cooley Street in Springfield. We spoke to one woman who was buying the fresh produce.

"Well, first of all, it's this and I like the idea the roots are still attached and growing coming for it," Barbara Schofield told 22News.

One evening in late April, an unlikely group of educators, organizers, corporate leaders, business professionals, youths and community members gathered on the fifth floor of an office building in downtown Springfield.

Hosted by Baystate Health affiliate Techspring and the Wellspring Cooperative Corp, this was the first in a series of events intended to spark conversation and build relationships around a vision for a vibrant, community-driven economy — cooperative development. Over the course of the evening, the case was made that co-ops — businesses that are owned and operated by their members — could be an antidote to the decades of growing inequality, job loss and social exclusion resulting from conventional development.

The workshop began with an icebreaker. Participants were asked to line up around the room in rank order of how much they thought they knew about co-ops. A few self-identified experts were followed by some who thought they knew a little bit, and by many who knew not much at all.

Though the number of cooperatives in the United States continues to grow, a general lack of knowledge about co-ops, even among those who are interested in the idea, is not surprising. Co-ops are often viewed as small, temporary or relatively inconsequential. And what is known about the history and efficacy of co-ops is largely filtered through a European perspective, as the evening’s featured speaker Jessica Gordon Nembhard explained.

Nembhard’s presentation, which drew from her book “Collective Courage: A History of African American Cooperative Economic Thought and Practice,” detailed the important role that co-ops have played in black communities and civil rights struggles. Between the mid-19th century and today, hundreds of African-American owned co-ops were created to pool resources, create resilient communities and gain economic power. (Read more...)

Construction of Springfield's first commercial greenhouse is ready to begin, after Mayor Domenic Sarno and city officials gathered to announce the future addition to the Indian Orchard neighborhood.

Wellspring Cooperative Corp., a community-based development organization, is in the process of purchasing a 1.5 acre property that was once a part of the Chapman Valve site. Site work and construction of the Wellspring Harvest greenhouse is set to start once the land is purchased from the Springfield Redevelopment Authority.

"This is a great combination of education and empowering green economic development," Sarno said in a press release.

The Wellspring Harvest greenhouse will be located at 121 Pinevale St. in the Indian Orchard Business Park.

The greenhouse will use hydroponic gardening, which uses mineral solutions in water and soil to grow crops. Once completed, the project will produce 250,000 plants annually, including lettuce, tomatoes and cucumbers, which Wellspring plans to distribute to local schools, hospitals and communities. (read more...)

A plan to build a worker cooperative greenhouse in western Massachusetts has received a boost with the announcement of purchasing commitments from several large institutions.

Baystate Health, the Springfield Public Schools, and Big Y Supermarkets have agreed in principle to purchase produce from a greenhouse that a non-profit organization hopes to build as part of a network of worker-owned businesses in inner-city Springfield.

The project is being developed by Wellspring Cooperative Corporation. Co-Director Fred Rose said the quarter-acre hydroponic greenhouse will grow lettuce, greens, and herbs.

"The demand for local food is huge," said Rose.

Wellspring is negotiating with the Springfield Redevelopment Authority to build the greenhouse on a 1.7-acre site in the Indian Orchard neighborhood. (more)

Baystate Health, Springfield Public Schools and Big Y supermarkets have committed to purchasing produce from Wellspring once it's up and running. Those stakeholders came together at Baystate Medical Center in Springfield Wednesday morning to talk about the project's progress. (read more) 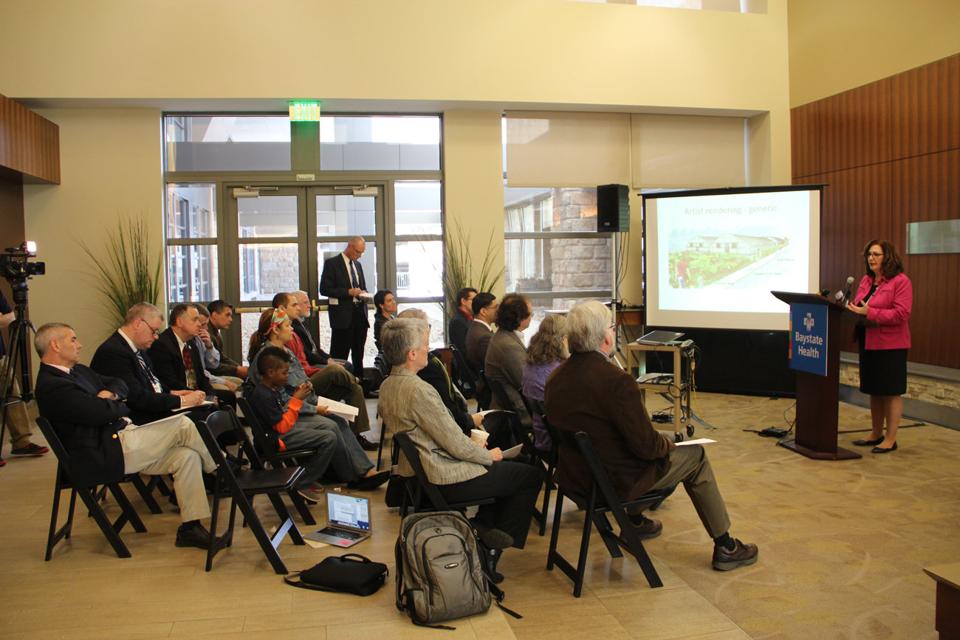 Springfield will be home to its first large scale greenhouse this fall according to the Wellspring Cooperative Corporation (WCC), a new community development organization whose mission is to create jobs and wealth for low income city residents.  Wellspring joined Baystate Health, Springfield Public Schools and Big Y supermarkets on Wednesday April 20 to announce their partnerships to bring greenhouse produce to their customers and communities.

If video not working, click on this link: https://www.youtube.com/watch?v=KHJVEVO0_FE

Produced in 2015 by Tom Bienemann and his students at Putnam Vocational Technical Academy, this new video offers a glimpse into the present and future plans for Wellspring.

The city's burgeoning network of worker-owned cooperatives, Wellspring Collaborative, is getting some street cred for its work within economically struggling Springfield communities.

The organization was one of 11 U.S. initiatives featured in the new report "Educate and Empower: Tools for Building Community Wealth" by Democracy Collaborative, a Washington-based research and policy development group. read more

“The cooperative business model is taking hold across the country. Springfield institutions are smart to take part in this trend.” read more

“Wellspring is the name of a unique collaborative designed to create economic opportunities and revitalize Springfield’s neighborhoods. Launched in 2011 with a grant from the Robert Wood Johnson Foundation, the program intends to use the purchasing power of the region’s largest employers to provide a market for new worker-owned companies that will create entry-level jobs and ownership opportunities for unemployed and underemployed residents.” read more

“Artwain Davis tore apart a restaurant booth bench Wednesday morning at the Wellspring Upholstery cooperative and at the same time put together not only a career for himself but a business that promises to train and employ others in Springfield’s South End.”
“It just goes to show that there are jobs out there,” David, 22, said. “There are opportunities out there if you keep working.”
His work was interrupted as reporters and local officials toured the Wellspring workshop at 141-43 Main St., for the organization’s grant opening. It’s located in the same building as Corporate Design, NE and The Design Center NE, two interior decorating and Design Resource Center NE, two interior decorating and design businesses that help drive traffic to the upholstery business.” read more and see photographs

“2013 was a good year to become a worker-owned company. Although just a selection of some of the newest worker-owners on the block, we highlight 17 new and existing businesses that were founded as or transitioned into worker-ownership in 2013. If these businesses are local to you, we encourage you to support and welcome your newly worker-owned neighbors…” read more

In the fall of 2013, the Wellspring Upholstery Cooperative (WUC) opened in Springfield, Massachusetts. It was the first of a planned network of worker-owned companies developed by the Wellspring Collaborative to provide entry-level jobs for some of the hardest-to-employ residents in the area.
The Wellspring Collaborative is modeled after the Mondragon Cooperatives in Spain (110 cooperatives employing 80,321 people in 2012) and the Evergreen cooperatives in Cleveland (a network of four worker-owned companies). Evergreen uses the purchasing power of large anchor institutions to provide a stable market for new place-based, worker-owned companies and has received national attention for its potential to revitalize blighted neighborhoods… read more here

Wellspring Upholstery Cooperative staff members explain what its like to be part of a worker co-op, MassLive, Dec. 2, 2014